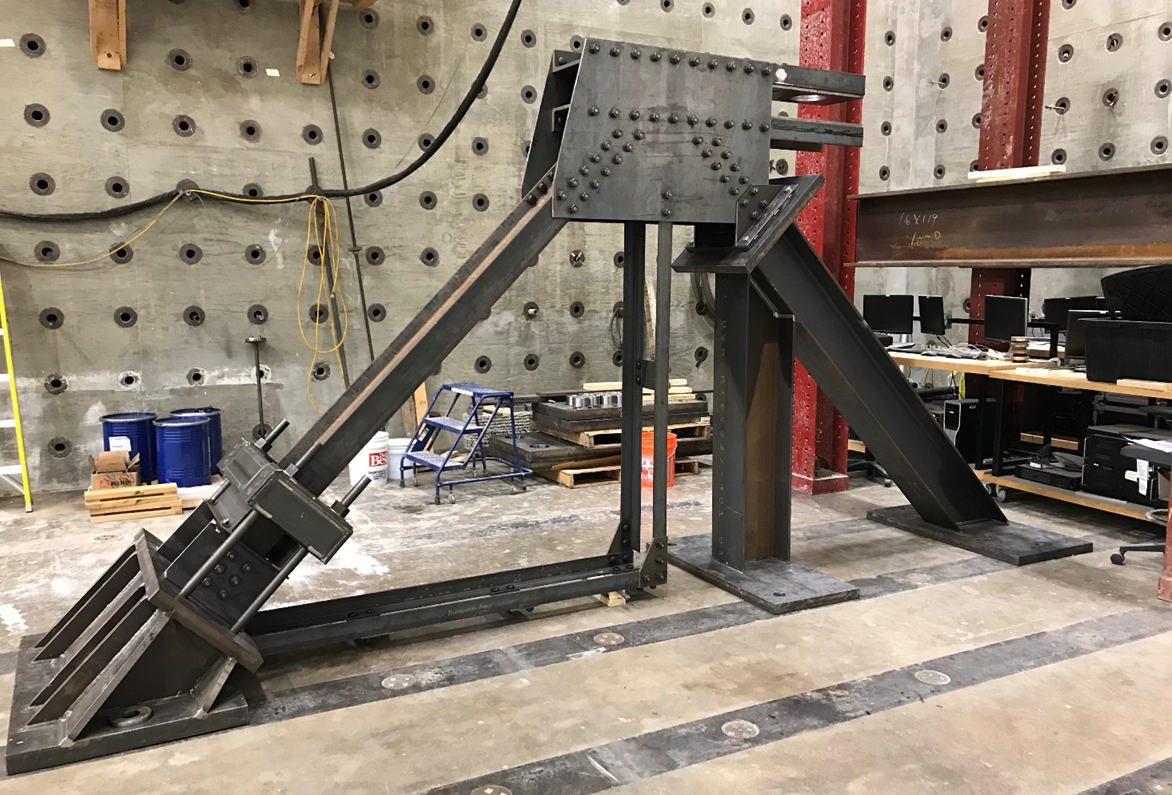 Nathaniel Levine, Dr. Brian Eick, and Dr. Billie F. Spencer recently completed the testing an anchorage assembly embedded in concrete as part of a nationwide project studying fatigue of miter gates. The goal is to work with the US Army Corps of Engineers (USACE) to develop a methodology to monitor their large inventory of miter gates on the Mississippi, Ohio, and other rivers to better estimate where and when fatigue failures are likely to occur and to take remedial action before catastrophic failure.

USACE is currently in the process of upgrading miter gates on the Upper Mississippi River. Miter gates are a component of river lock systems that seal the ends of the lock chamber so that the water level can be raised or lowered. Of particular concern is the miter gate anchorage, which transfers the overturning reaction from the hanging gate to the concrete lock wall. The anchorage is a steel frame partially embedded in the concrete lock wall.

When anchorages are designed, the contribution of the concrete is typically neglected and the anchorage is analyzed like a freestanding truss. This approach predicts very high stresses in the anchorage – high enough that design engineers are worried about imminent fatigue failures in the embedded components. This concern is compounded by the fact that gates on the Upper Mississippi River are being replaced with new, heavier gates so the anchorage loads will increase. Given all these factors, USACE has been excavating and replacing the anchorages as they upgrade the gates on each lock.

However, this analysis method is conservative and a more accurate analytical model could eliminate these fatigue concerns. The goal with this project was to develop a better way to analyze the anchorage and then perform full scale testing to calibrate and verify that model. Mr. Levine, Dr. Eick, and Dr. Spencer have proposed a new way to analyze the anchorages, modeling the concrete as springs perpendicular to all steel surfaces. This approach captures the effect of steel bearing against concrete but conservatively neglects any bond or friction between the steel and concrete. This modeling predicted much lower stresses in the steel than the USACE traditional analysis method and suggests that there is no need to excavate and replace the existing embedded anchorages.

The USACE will not base a multi-million dollar design decision off an unverified model so the research group at UIUC worked with the NSEL Machine Shop to build a full-scale model of the anchorage. They first tested the steel alone to mimic the “freestanding” condition of the typical anchorage analysis. They then cast the specimen in a concrete block and repeated the test. The results confirmed the finite element modeling – the stress deep in the embedded components is sufficiently low that fatigue is not a concern and USACE can likely reduce the scope of their anchorage replacement efforts, potentially saving millions of dollars. Some exposed components will likely need replacement but USACE will no longer need to excavate and replace the entire structure.

The next steps for the research group will be calibrating their model against the experimental results. This will allow the modeling techniques developed by Mr. Levine, Dr. Eick, and Dr. Spencer to be applied more generally for different types of anchorages in the USACE inventory.